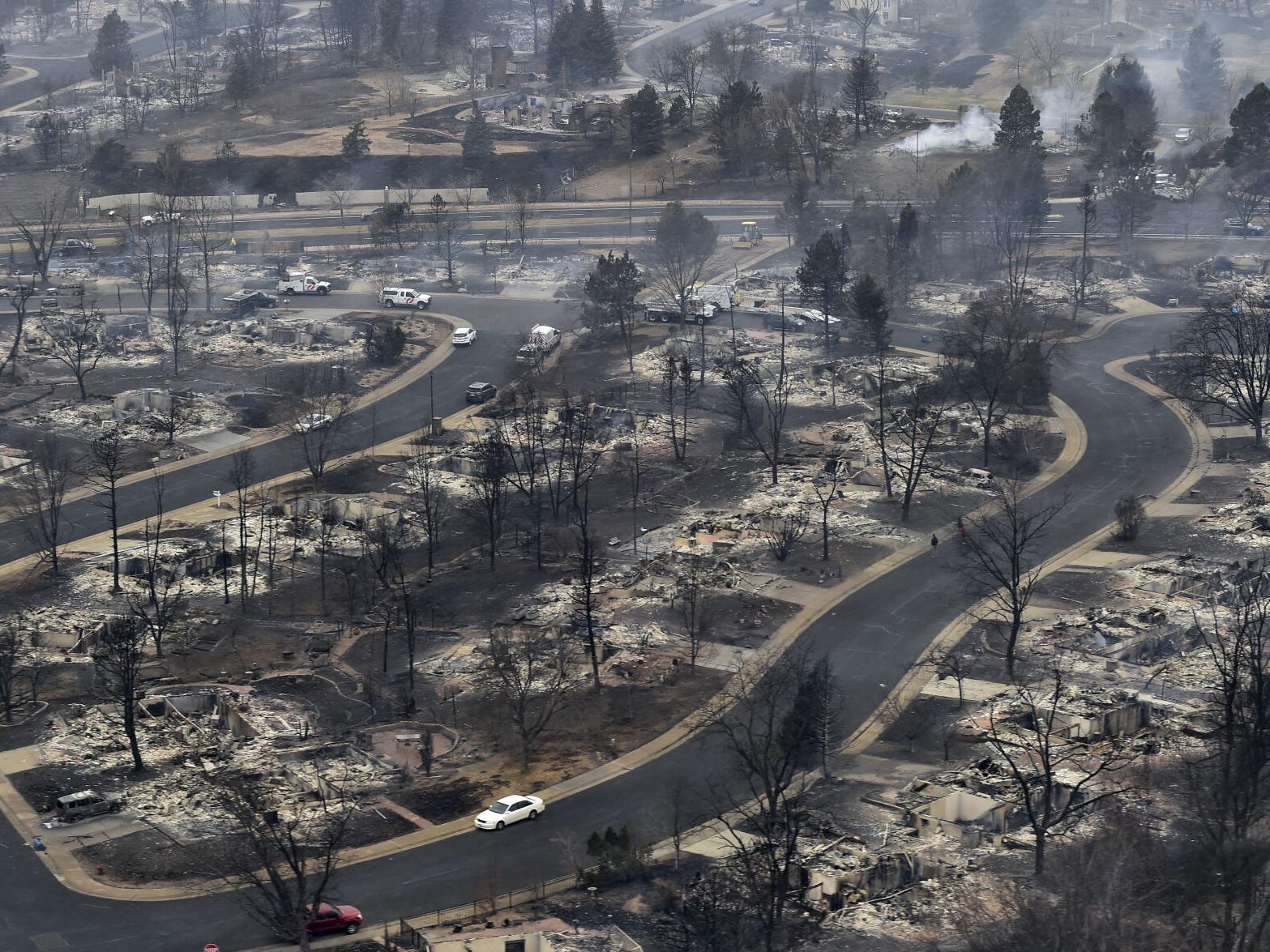 From the Ashes, Hope Springs Eternal

It is hard to believe, but it was almost a year ago that the Marshall Fire blazed through Boulder County, Superior, and Louisville. It was a tragedy to all those families and homeowners who lost their homes or were injured, especially to the families of the two fatalities, Robert Sharpe (69) and Edna Nadine Turnbull (91). Our thoughts and wishes go out to those who were affected. Many are still rebuilding their lives after such a massive upheaval.

What you might not realize if you were more removed from the story is that the fire was the most financially destructive in Colorado’s history. According to the Denver Post in October, the fire is four times more expensive than initially expected, exceeding $2 Billion in damages, making it the 10th most costly wildfire in U.S. history. One thousand eighty-four homes were destroyed. 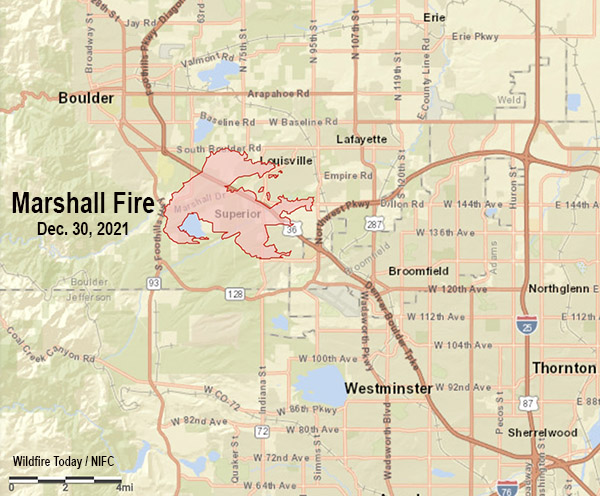 Despite those staggering statistics, it’s not all bad news. Back in January, it was hard to see how people would be able to move on from such a tragic loss of their homes, but some have decided it’s time to move on, selling their land in the process. Although not all of them are selling for this kind of money, the most expensive burnt plot went for $1.4 million. Of course, that doesn’t nearly make up for the heartache or lives lost, but it is a bit relieving to know that the area will slowly be able to grow out of the ashes into something new over the next couple of years.

As usual, how things are going in the real estate market depends greatly on your point of view and individual goals. But one unusual thing about this year is that it is the most significant yearly decline in mortgage applications, according to the Wall Street Journal. From a busy spring to dramatic mortgage rate hikes and the subsequent tumble in real estate sales, it is no wonder the data shows a significant decline in activity over the year. For example, in October, sales were down by 40% in metro Denver vs. October 2021. 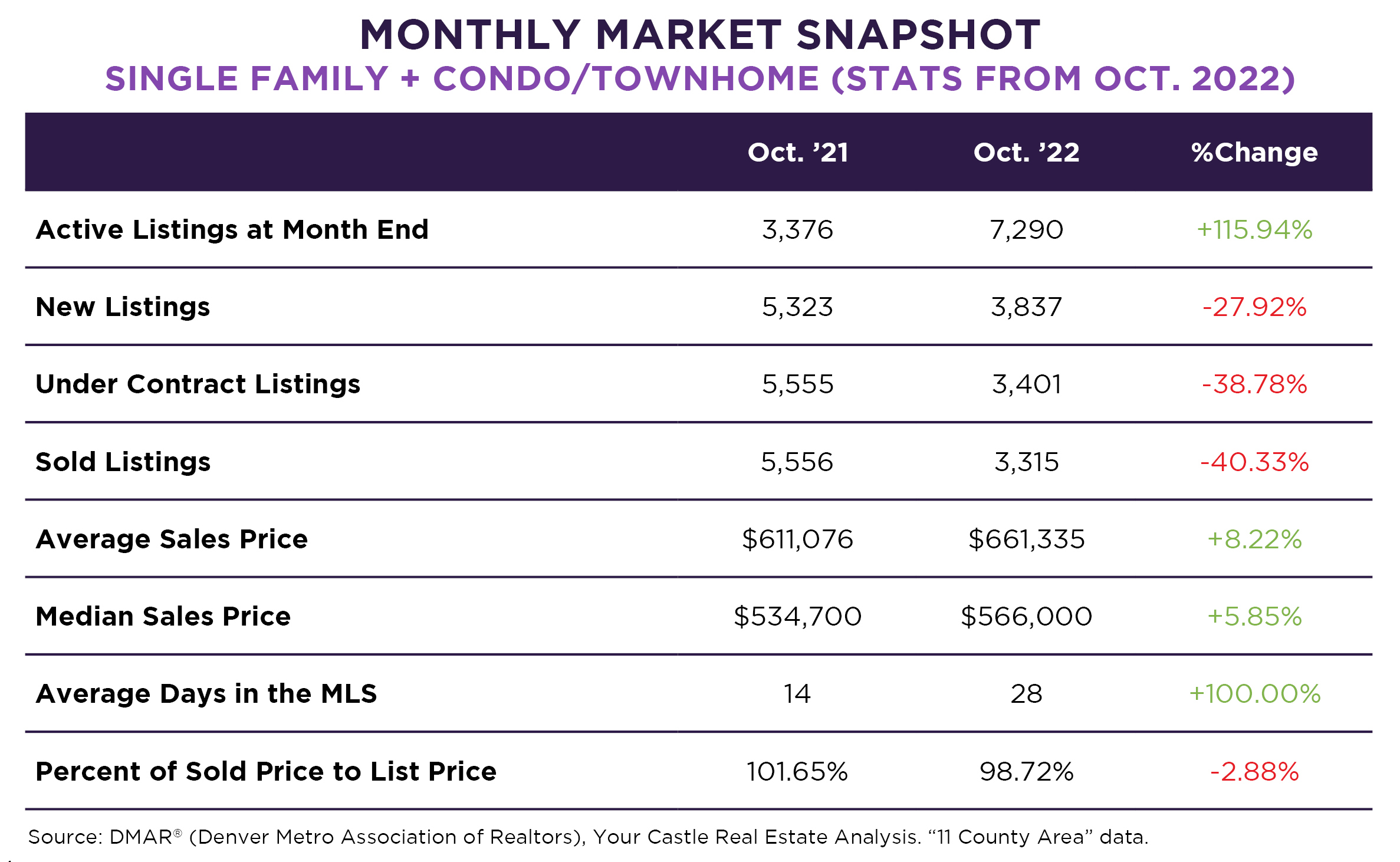 But it’s not all doom and gloom. In fact, at the same time this W.S.J. headline came out about the dramatic decline in mortgage applications this year, mortgage rates went down by half a percentage point in the same week. Why? Because news came out that inflation may have finally hit its peak, it seems to be on the decline now.

The factors determining inflation are complicated, but you can see from this Consumer Price Index chart that Gasoline, Energy, and Electricity prices recently went down considerably. 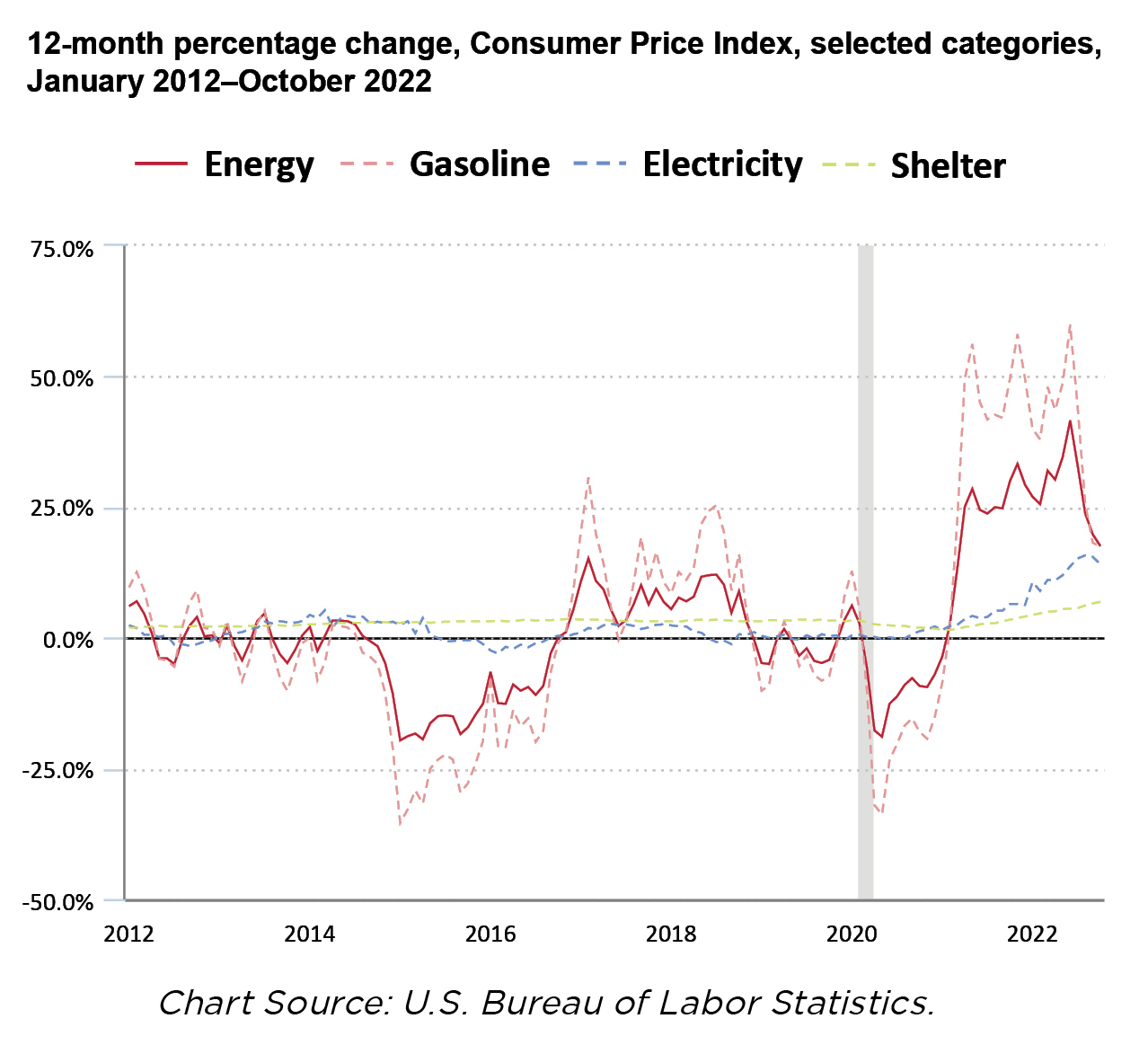 As you can tell from the half-a-point reduction in mortgage interest rates mentioned above, as inflation goes down, rates are also likely to keep going down, which should increase mortgage applications and sales. Of course, lower inflation may take some time to work its way through the economy to the point where things feel a bit better, but this is positive news compared to what we have seen lately.

Late fall and early winter are historically the worst times to sell a home, but many people do it yearly. If for some reason, you need to move this fall/winter, the odds are that your residence would sell at or close to the asking price. Some sellers are a bit petrified right now, given the current economic conditions, but as a homeowner, it is essential to consider long-term trends. If this is the right time for you to move, think that average home prices were still up over 8% in October from October 2021. So although things are taking longer to sell right now, at around 28 days on the market, the demand for homes is still there, and we are still in a seller’s market.

Now Could Be Your Time to Shine!

Now that rates have gone down a bit this month, it will likely help you lock in a lower monthly mortgage payment than you could have last month. Inventory is also up considerably since more people are waiting on the sidelines. In October, there were 116% more homes to choose from than in October ’21. So although many other buyers might have given up due to fear of the economy or rising interest rates, you could get out there and have a fighting chance of getting the home you want at a lower price than before. Homes are selling at an almost 3% price reduction on average, which hasn’t happened in a long time.

Home builders are also feeling the pinch from the economy so that they could have some very positive buying bonuses river, many of them were overbuilt after the pandemic, and now demand has softened a little due to rising rates, so they are likely stuck with inventory they cannot sell fast enough. That is quite expensive for them, so they will probably feel massive pressure to market those homes and cut their losses by the end of the year. Perfect time for you to swoop in there and get a great deal!

*We use reasonable efforts to include accurate and up-to-date information. However, the real estate market changes often. Therefore, we make no guarantees of future real estate performance and assume no liability for any errors or omissions in the content.