A REBOUND IN CONFIDENCE, BUT INVENTORY LAGS BEHIND

The “dark winter” is winding down, and spring is growing on the horizon. As we do another lap around the sun, some things are considerably different from last spring. For one, consumer confidence had come a long way since the turbulent shutdown last year. Three FDA-approved vaccines are being administered for emergency use. Many at-risk citizens, hospital workers, and government employees have received one or two doses. Congress also approved a third wave of stimulus checks for many people. They will be sent out this month across the country, further soothing some of the ongoing pandemic’s financial burdens. On the other hand, housing inventory is still lagging in seven counties that make up the Denver metro area, and interest rates continue to climb.

The average number of listings in February is historically 13,500. At the end of February 2021, there were only 2,025 active listings, a record low (includes attached & detached homes).  This February was down 58% in inventory from the same time last year. The simple fact is, we need to reach a critical mass of people getting vaccinated for some sellers to feel safe opening up their homes to strangers. We do not expect this to happen until sometime this summer. 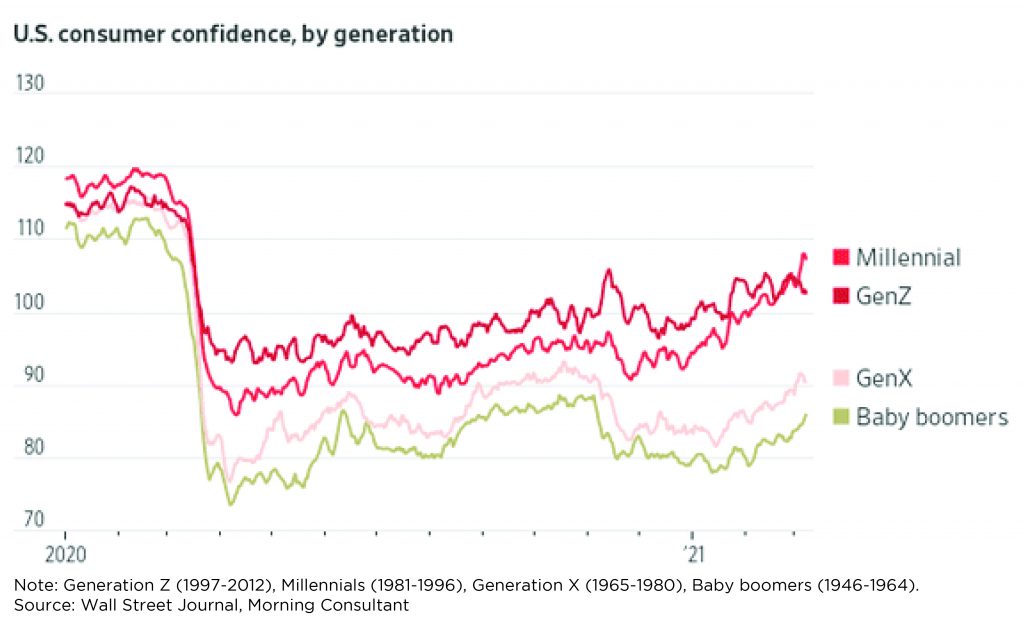 INTEREST RATES ARE ON THE RISE

The average 30-year fixed mortgage rate recently increased to the 3% mark for the first time since last July. This may discourage some buyers, potentially lessening a bit of the competition in the market. But it is important to keep in mind that 3% is still historically very low. In Feb. 2020, before the pandemic hit, the rates were already considered historically low at 3.5%. In comparison, rates were at 4.5% in Feb. 2019 and 6% in Feb. 2008 at the start of the last recession. These increased rates mean that a homeowner would owe more money in interest over time. However, they would also be gaining equity faster, as appreciation in Metro Denver is up to nearly 20% from this time last year.

MANY HOMES STILL SELL AT, OR NEAR, MARKET VALUE

One recent trend in the media has been to focus on the most extreme homes selling for more money than their list price, further frustrating buyers. They have highlighted homes that have had over 100 showings in the first weekend and 20 offers, telling people that they need to be prepared to offer 20% above the asking price on homes. Although this is a competitive market and is true of select homes, it is certainly not the norm. In February, on average, homes sold for a 1.9% premium (See the February Market Snapshot Graphic.) For a $350K home, this would amount to $6,650 over the asking price. Still a dramatic reflection of low housing inventory, but not as dire as a 20% markup. Many homes still sell at, or near, market value.

Many buyers are getting frustrated over getting outbid on brand new listings. One helpful strategy to combat this could be to focus on homes sitting on the market longer than one weekend. These homes may be perceived as defective by buyers. However, in many cases, they were just priced too high by overzealous sellers. After being passed over for being overpriced or having passed on decent offers, these sellers may sign lower offers than they had initially hoped to accept. 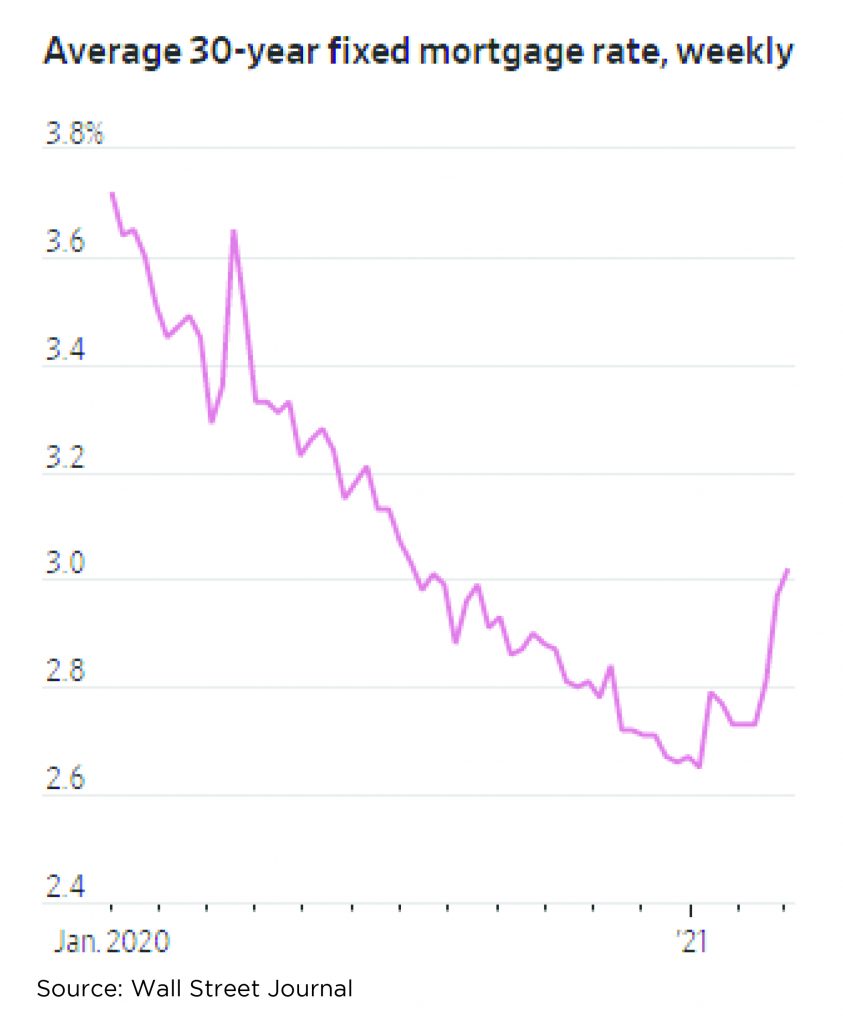 The 30-year fixed mortgage rate has slowly been on the rise since the year began, as it appears that it bottomed out at the end of last year. As these interest rates continue to climb past 3%, some marginal buyers will pull out their home searches. This will gradually reduce the buyer pool. In addition, it is all but guaranteed that as more people are vaccinated and comfortable with people in their homes, many first-time sellers will list their homes to try and capitalize on the current seller’s market. Over the course of the year, this should increase the available inventory. Although showing traffic is still incredibly high and is expected to remain a seller’s market for quite some time, it will most likely reduce some of the current fervor in the market in Denver.

As a prospective seller, especially in the $1MM+ price band, act now to get the most out of your home sale. 63% more homes over $1MM were sold in Feb. ’21 than in Feb. ’20. Sellers are cashing in on low-interest rates before it is too late. Another point of note is that if your new listing is under $800K and you are not getting 20 showings in the first week, odds are your home is overpriced. Although the market is in your favor, you should expect that if you get 10-20 showings the first weekend, one offer, and that offer is an at-or-near asking price, that is normal. Do not lose out on a sure thing because you are reaching for some fabled 20% above asking price sale. Throughout the process, remember the reasons you are selling your home and celebrate that closing! 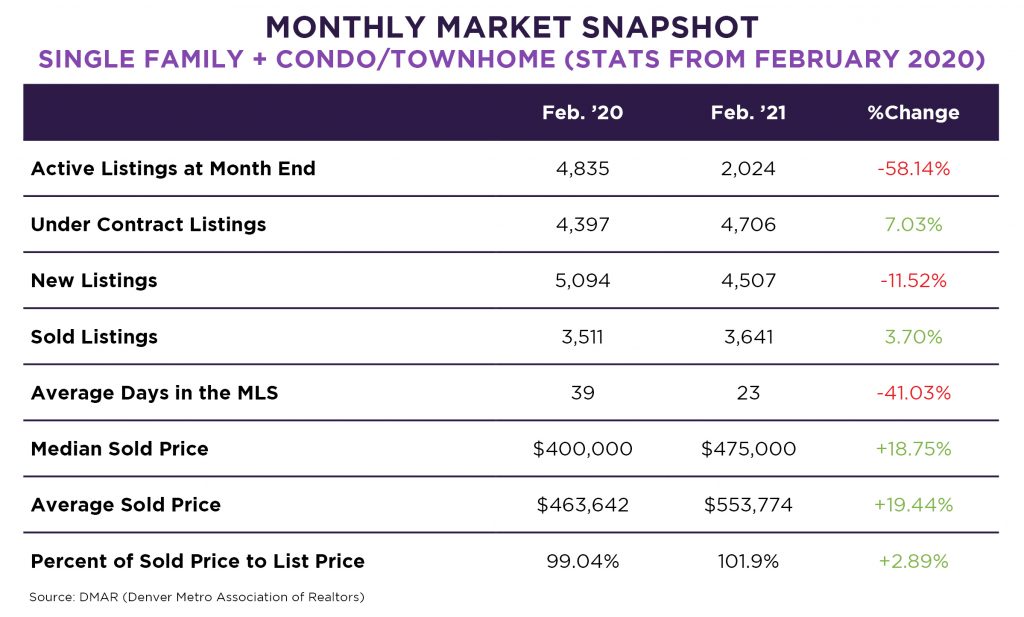