IT IS UNLIKELY THAT HOME PRICES WILL DECLINE IN METRO DENVER

The tide of the pandemic finally began to shift this week. Mask mandates have been lifted for fully vaccinated people, according to the CDC. Although this decision is controversial, for many, it signals a return to pre-pandemic ways of life. As more people are vaccinated, and sellers feel safer, it should help ease some of the low housing inventory. But uncertainty remains in this market. I am asked daily, sometimes even hourly, “Will home prices go down?” Let us look at the historical data to see why I do not think this is likely.

The first graph shows the historical price change for homes and condos over the past 50 years. You can see that the average Metro Denver home price has gone from about $50k to about $500k, an increase of 10x! However, removing the effect of inflation, you can see that the average price 50 years ago was $200k. So, over the past 50 years, prices have not really gone up by a factor of 10. Rather they have increased by a factor of about 2.5. A large part of that price increase is because larger and more deluxe homes were built over the past 20 years than in previous decades.

But what will happen over the next five years? The red dashed line is an educated prediction. Over the past 50 years, we have seen an average of 6% home appreciation. We will see a bit less over the next five years, so I added a forecast that prices will go up 5% per year. I think the average home price is going to be about $600k five years from now. If you are a first-time buyer and can afford to buy a home, this would be a good time to pounce before prices drift steadily upwards and you get priced out of the market. 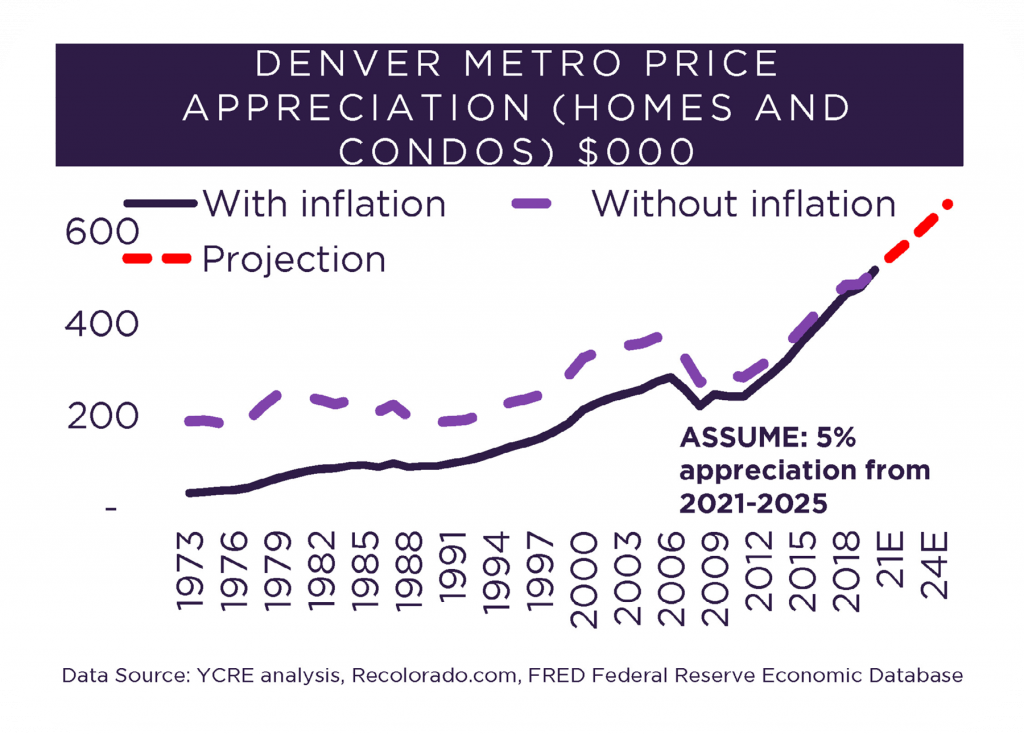 The second graph shows that the income per capita in Denver has gone up dramatically over the past 50 years. If you look at the 1970s, the average salary was around $8K. Currently, it is around $100k. Just like with home prices, you can see that is an increase by a factor of about 10. However, removing the effect of inflation, the average wage in Denver was about $40K in 1973. Without inflation, the wages have a little bit more than doubled, and there is a good reason for that. This is a much more sophisticated city, with a much wider variety of jobs today than it was 50 years ago. Denver also has a highly educated workforce, among the best in the nation. But what will happen to incomes over the next five years? I forecast 3.5% growth. Why? Because that is what our wage inflation has been over the last 5-6 years, and it is likely to continue at about that pace. 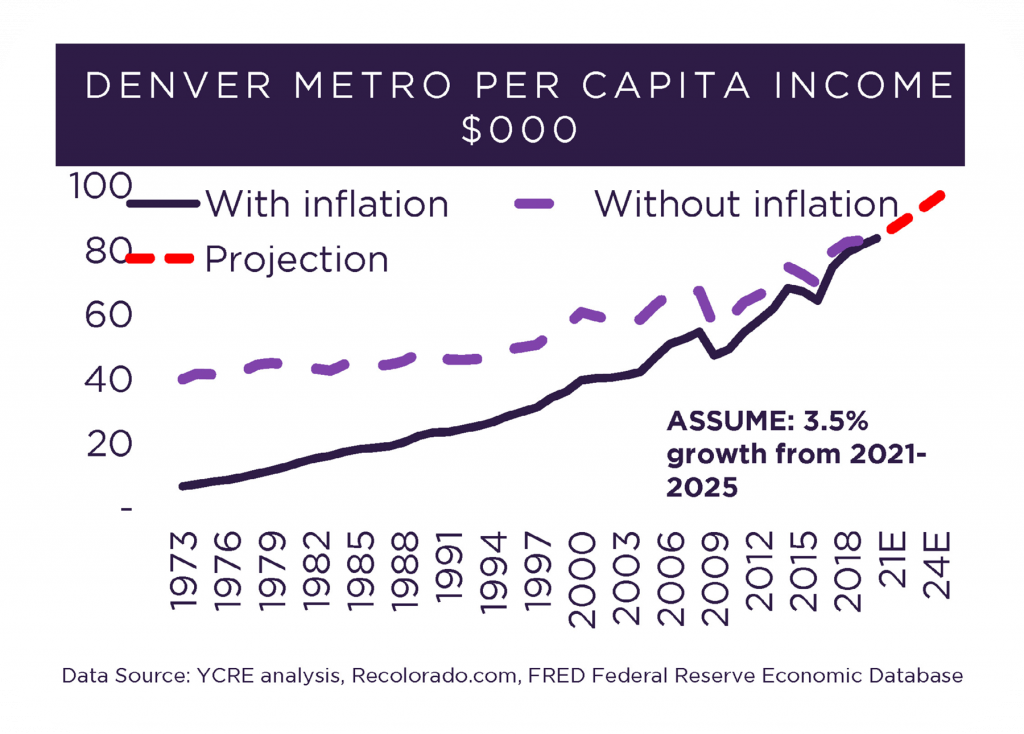 The third factor is mortgage rates. Mortgage rates are meager right now. They are still close to 50-year lows, even though they’ve gone up a bit recently. This is another driving factor to keep the demand for homes high. What will happen to rates over the next five years? If you look at the average mortgage rate over the past decade, it was about 4.5%. Consequently, I forecast that we will go from our current rate, about 3%, to about 4.5% over the next five years. 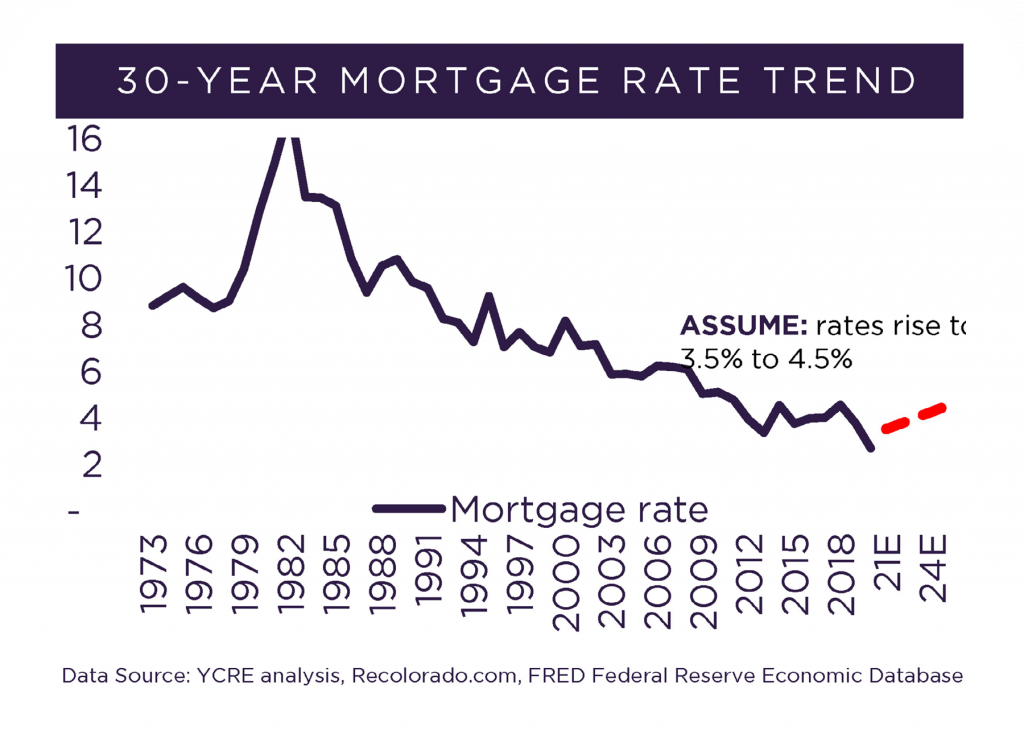 The fourth graph looks at the average mortgage payment without inflation. This was built by looking at the average price of homes each year with an assumed 10% down payment. This shows what the principal & interest payment would be with the prevailing mortgage rate each year. You can see that the long-term average is about $1,550 per month. This is barely more expensive than the current average. So, homes are actually about as affordable as they have been historical, on average. What will happen to mortgage payments over the next five years? I think that is the root cause of many people’s concerns – they are going to go up a lot! You can see on the chart that the payments will increase from maybe $1,600-$1,700 per month today to maybe $2,500/per month. This seems like a serious problem until we look at things from an affordability standpoint. 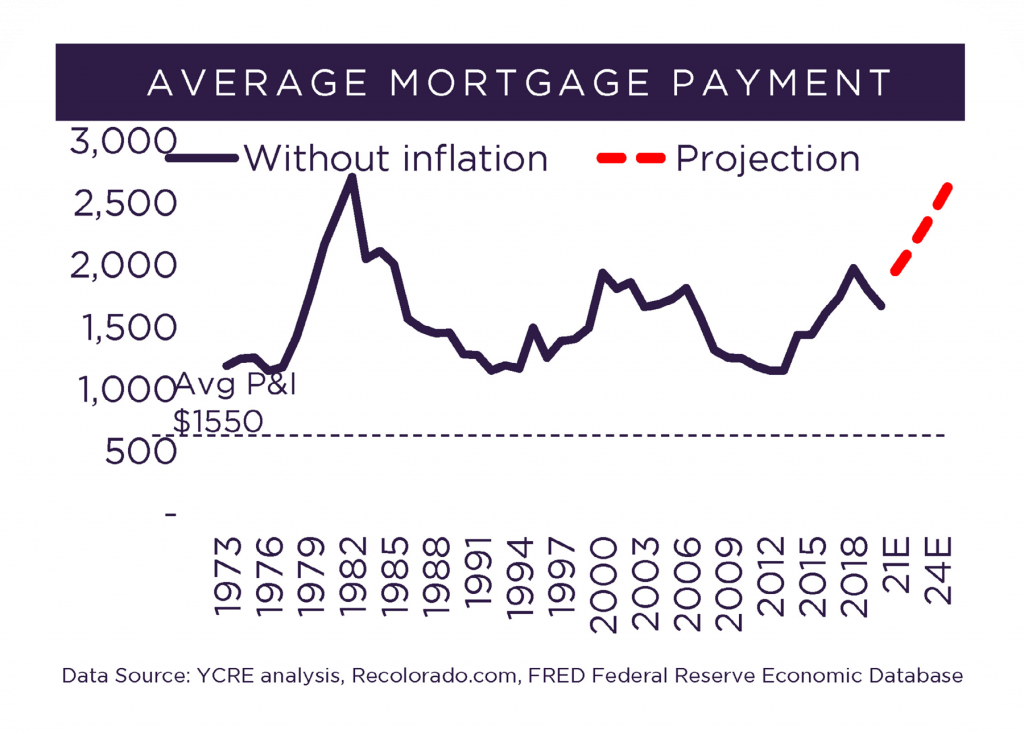 MORTGAGE PAYMENT AS % PER CAPITA INCOME

Finally, we will look at affordability. This is ultimately the metric that matters the very most! This chart was built by taking the principal and interest payment for an entire year and dividing it into the per capita income. This graph essentially shows how much of the average person’s income would have to be used to pay their mortgage payment. You can see that it is currently in the 30% range. The historical average is about 35%. Therefore, we are slightly more affordable now than the historical trend, on average. This affordability is a gift of historically low mortgage rates and higher incomes in Metro Denver.

Right now, the market is stable. It makes sense that we are seeing higher prices from a supply and demand standpoint. Over the next five years, you can see this metric will rise substantially. However, because incomes are also going up dramatically, it will not be as impactful as some people fear. Instead of these payments being below the historical average like they are currently, they will rise closer to the long-term average. 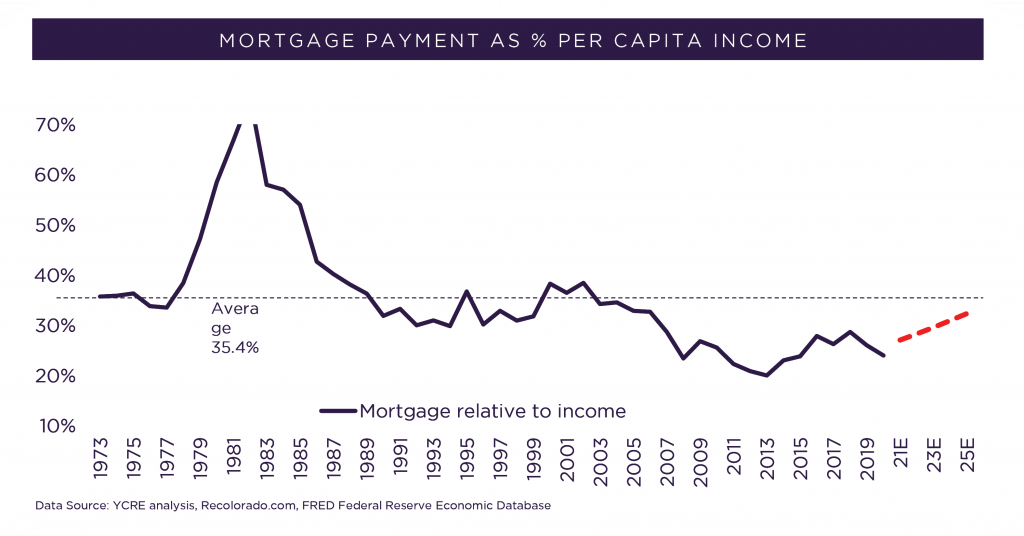 There is basically no reason in a market where we have low inventory and favorable mortgage rates for prices to go down. Based on the historical data, I think the market will see modest price increases for the next five years in the Metro Denver market. 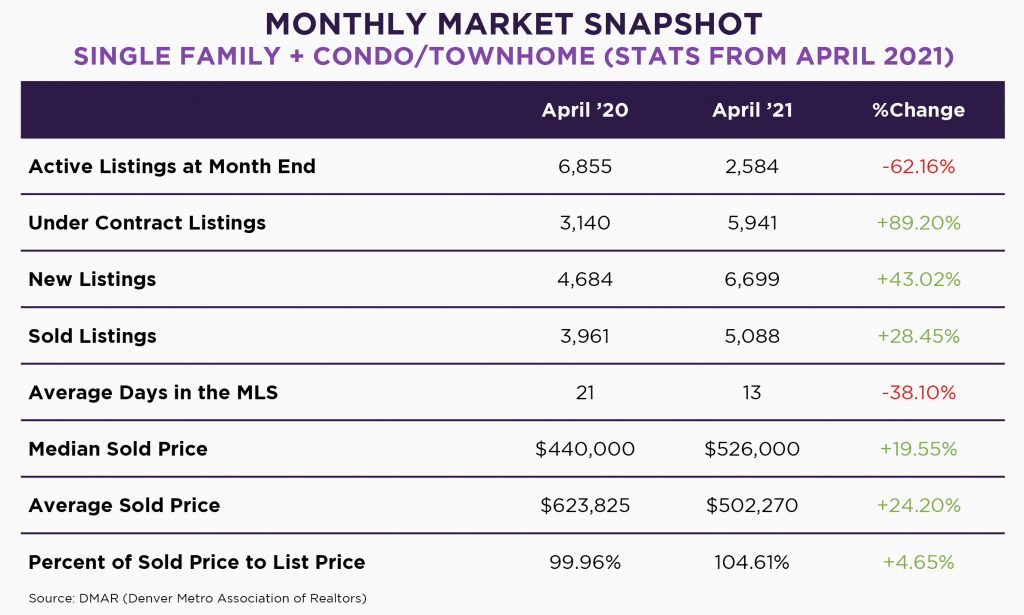